As the world leader in crude oil production, Saudi Aramco’s operations span the globe and the energy industry. We run an extensive network of refining and distribution facilities and are responsible for the oil & gas processing and transportation installations that fuel Saudi Arabia´s industrial sector; thus contributing to Saudi Arabia´s status as the leading country for petroleum exportation. As our company’s largest oil processing facility and the largest crude stabilization plant in the world, the Abqaiq Plants facility plays a pivotal role for Saudi Aramco with our crude oil production capacity of more than 7 million barrels a day. Such extensive and sophisticated oil exploration, production and exportation require oil companies such as Saudi Aramco to use cutting edge technology because even a very short period of unforeseen operational downtime can result in the loss of millions of dollars. Fortunately, with the help of Integration Objects´ reliable and robust OPC products and integration services, the process, data and alarm management technologies at Saudi Aramco in general, and specifically at the Abqaiq Plants facility, are second to none in the oil industry.

Time for a change

Complexities and diverse needs are to be expected for any large oil producer with significant plant operations. Such complexities are enhanced as plant operations grow, technologies get updated and changed and the needs of the plant and business systems evolve.

With this in mind, Abqaiq Plants’ engineering personnel closely monitored the industry’s technology trends and sought an open, proven technology that could protect its existing infrastructure and pave the way for future expansions. Many alternatives and products were tested and piloted in order to identify the most feasible and practical approach to align Abqaiq Plants´ infrastructure with the rapid advancements in the industry. Saudi Aramco Abqaiq Plants had a set of stringent and complicated requirements to assure a continued and uninterrupted flow of process data. Integration Objects was selected because this vendor was able to meet the rigorous and complex requirements that Abqaiq Plants had in order to integrate a 23 point to point connection infrastructure based on the VMS and Unix platforms that connected all the Distributed Control Systems (DCS) and other automation islands with the PIMS (Plant Information Management System). 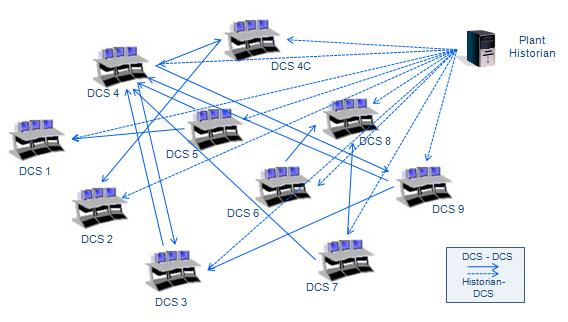 It is not unusual to find such complex architectures in large plant systems where operations, and therefore necessary support structures, expand over time. For Abqaiq Plants, even though each point to point connection addressed a particular need, the overall system architecture was cumbersome and costly to update and maintain because by then, VMS had been practically fazed out of the market and industry so interoperability and spare parts for the hardware became difficult to find. Changes in the DCS (upgrades, replacements) impacted the communication between applications and each change also typically required the implementation of new point to point interfaces. This made us at Abqaiq Plants quickly realize that each point to point interface required specific maintenance, spare parts, and maintaining on site expertise which added considerable costs to our operational budgets. To add to the complexity, we were determined to march ahead in the technology exploration and piloting of all beneficial applications that aimed at optimizing our day to day operations.

Once we had decided it was time to upgrade and improve the efficiency of our DCS interconnections, and after a thorough evaluation and testing of many products, we found the solution from Integration Objects.

Our primary requirements were:

Using these guidelines and taking into consideration the needs and complexities of our operations’ specifics, the Abqaiq Plants engineering team, system integrators and project engineers from Integration Objects implemented a solution with the final following architecture:
Abqaiq Plant´s system architecture 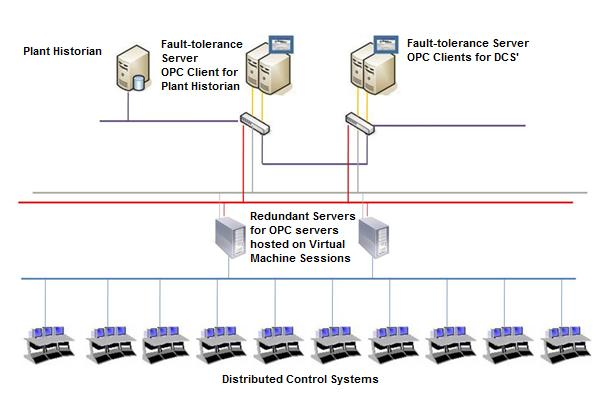 OPC was identified as the industrial standard solution able to simplify the whole system architecture. Each DCS exposes its variables on an OPC server provided by the DCS’ manufacturer and data exchange is performed using OPC clients that access data on the servers. The OPC client-server approach also creates a more flexible system which is useful in case there are any future changes.

To simplify the system architecture, the engineers installed a redundant hardware configuration by running a virtual infrastructure (VMWare virtualization software). Two virtual servers were deployed on a redundant configuration with each server hosting 10 different virtual machines; one for each OPC server. These servers were configured as two units where the first acts as a primary machine and the second (geographically located at another site) as a backup. Because OPC servers cannot directly communicate with each other, inter-DCS data exchange was provided by installing Integration Objects’ OPC Data Transfer which is a plug-and-play software tool used for transferring real time data. OPC Data Transfer fixes the above mentioned problem as it configures and monitors bi-directional data transfers between OPC servers so that all processes are integrated.

The communication between the plant historian, OSIsoft PI, and the DCS’ OPC servers was based on OSIsoft’s PI-OPC interfaces which consist of OPC clients that are able to manage the redundancy of the OPC servers and their switchover. The redirection of clients to the appropriate server is automatically performed. At this point it was necessary to ensure the redundancy of the clients in order to guarantee that they cannot become single points of failure during daily operations. This need was satisfied by installing them on servers running Marathon EverRun software. This software synchronizes two standard Windows servers to create a single application environment that runs on both servers simultaneously, thus maintaining availability under any circumstance.

The final important subject addressed by the system integrators was related to the security and efficiency of OPC communication. The system integrators explained that the DCOM layer used by OPC can add additional issues to the machine configuration and open security holes in the network architecture. The new architecture implemented for Saudi Aramco Abqaiq Plants consisting of multiple OPC servers and clients distributed on 3 different networks would typically require a complex and long configuration of DCOM at any level. Additionally, weaknesses in DCOM security could expose their process network to external attacks. To resolve these concerns, Integration Objects’ OPCNet Broker (ONB) OPC tunneller software solution was included in the system architecture. ONB converts COM calls to .Net which addresses the concerns that COM/DCOM use can create. The OPC tunneling package is installed both on the server and the client side so that they may communicate securely with one another and eliminate DCOM configuration headaches.

With Integration Objects’ OPCNet Broker, to access a server, the client simply specifies the server IP address and port on which the server will listen which helps avoid security breaches caused by ports being opened unnecessarily. The client gets such information from a configuration file that is easily uploaded (XML file for example) and no other configuration is required.

Given the critical nature of the Abqaiq Plant operations, security was a key area to address. Since the data being collected on the network from the different automation sources could affect the availability and confidentiality of data, it was necessary that the data be encrypted with very limited user and external application access. OPCNet Broker provided these features by assuring data integrity through encryption/decryption and user authentication to avoid unauthorized access. 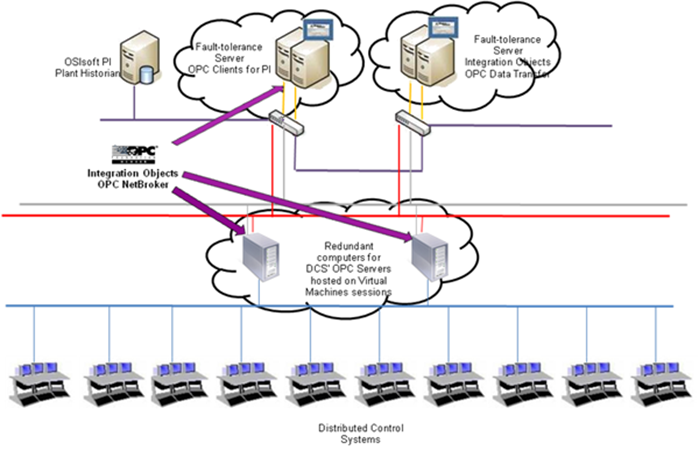 Given the scale and sensitivity of the mission, the project was implemented in two main phases. During the first phase, 3 DCS were targeted for DCS-PI interfacing and another 2 for exchanging data with 3rd party systems through OPC. This first implementation included testing the performances and the reliability of the proposed architecture. Once the success of the first phase was certain, phase II began which included interfacing all remaining DCS´ with the Plant Historian through the PI-OPC interfaces and also all the inter-DCS communications through the OPC Data Transfer application were set up.